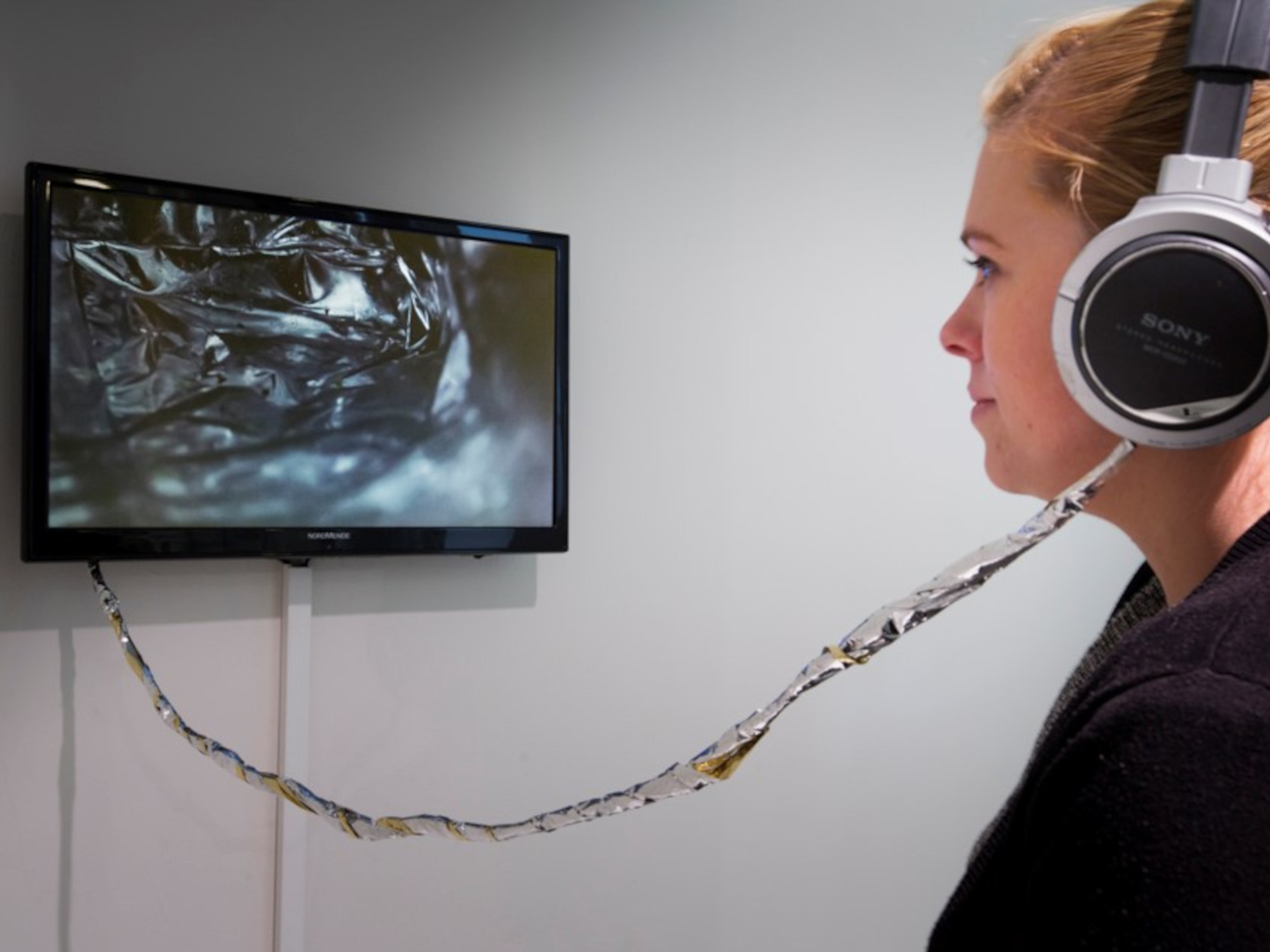 Tracy Hanna works primarily with video projection to create sculptural objects and environments. Often, the artist presents video footage that captures the textural and tactile qualities of objects and materials, thus bringing a pronounced facet of their physicality into the exhibition space in order to utilise digital video as sculptural material.
Video footage is combined with found and hand-made objects. This encourages anon-standard viewing of video and a more physical and involved experience of the artwork by the viewer, releasing video from its hereditary cinematic or televisual formats and entering it further into the ontological space of the viewer. This exhibition negotiates a shift in the artist’s practice; a dialectic concern within each artwork relating to materiality and representation is emerging and present in this work.
Though consisting substantially of projected imagery, this exhibition is presented for the most part in a light-filled gallery space, something the artist has never attempted before. This decision brings focus to the physical structures that surround the projected images, creating an equal balance of power between sculptural assemblage and the video image that it is integrated with.
There is a focus on material concerns in order to investigate the potential to breakdown the substance of digital video so as to open the possibilities of working with it in a physical and tactile way. This reflexive acknowledgement of the material at hand enables these videos to become pockets of manipulated space rather than filmic entry points.

Tracy Hanna is a visual artist born in Dublin and based in Rotterdam. Over the past number of years she has assembled a body of work that has been shown in solo and group exhibitions in Ireland and the UK.

She has presented work at the Royal Hibernian Academy, Dublin (2013) as part of ‘Futures 13’; the Northern Gallery of Contemporary Art, Sunderland (2013); PM Gallery and House, London (2013); Kilkenny Arts Festival (2012); Leitrim Sculpture Centre (2012); The Douglas Hyde Gallery, Dublin (2010). In November 2013 she presented a temporary public art work commissioned by Dublin City Council and Difference Exchange (UK) in the twelfth century St. Mary’s Abbey in Dublin’s city centre. In 2013/14 her work is part of a touring exhibition in the UK entitled ‘Walk On: 40 Years of ArtWalking’.

Exhibition: Holes: An exhibition of new work by Tracy Hanna

Highlanes Gallery is grateful for the ongoing financial support of Louth County Council, the Arts Council and Patrons,Benefactors and Friends of the Gallery.

Tracy Hanna has been kindly supported by the Arts Council of Ireland in the production of this work.