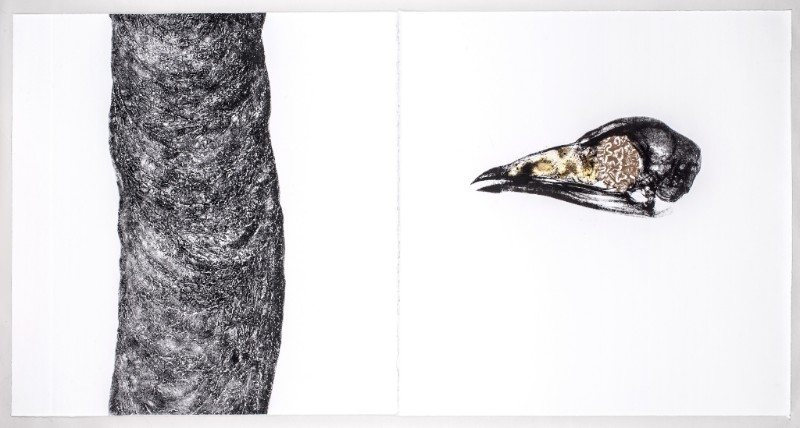 Landmarks and Lifeforms is an exhibition of new painting, sculpture, print and film by two west Cork-based artists. It opens to the public at Highlanes Gallery, Drogheda on Saturday 3 February from 3-5pm. The opening reception will take the form of an informal gallery talk with the artists and the exhibition’s curator, Ann Davoren at 3.30pm, followed by opening remarks by Dr Susan Steele, Chair of the Sea-Fisheries Protection Authority (SFPA)
Danny Osborne and Frieda Meaney have a lot in common. Both have lived on the Beara Peninsula on the western seaboard, on and off for the past 35 years. Both have migrated to various other countries during that time and now are back living and working in Beara again. Both continue to travel, collecting material, and collaborating with other artists and practitioners. Both artists engage with the landscape in an elemental way, through trekking, sea swimming, boating, archaeological exploration and often working outdoors.
This interest and engagement takes them into the areas of geology, biology, marine science, zoology and biodiversity and is presented in this exhibition through painting, print, video installation and sculpture, combining scientific with artistic interpretations of the natural world.
The visual and artistic expression of biology as employed in the work of Frieda Meaney is inspired by the ecosystem as a natural system consisting of plants, animals and micro organisms functioning together within the environment. She depicts the ecosystem in an intuitive way that is inspired by scientific disciplines. She works with images of living and extinct marine, terrestrial and airborne creatures in a way that blurs the lines between their respective realms to create work that portrays an idealistic and imaginative environment.
Her video installation for this exhibition mixes footage of endangered species of fish taken in an aquarium on the island of Tenerife, with the soundtrack of a chorus of birds in a South American jungle. The printed skeletal images of dinosaurs, reptiles and birds, revolving across and layered on the video projection, suggest an evolving world which is constantly changing and adapting to environmental circumstances.
Danny Osborne is fascinated by lava. The primordial material that formed the earth and everything that exists here now, including us, originally came from lava. This creative process continues today, marking the land around active volcanoes with both destructive and creative forces. Using the strong symbolic significance of the material, he developed a method of casting sculptures using red hot lava coming straight out of the vent of a volcano. A film of Danny at work making the sculpture on an erupting volcano is also included in the exhibition.
In another form of visual landmark, he explores the changing perspective of the Beara coastline when viewed from the sea. Recently he spent six days drawing the coast while on the ‘Celtic Dawn’, a local fishing boat working between the Bull Rock and the Mizen. Engraved drawings on whalebone represent some of the reference points that the whale would have registered while navigating these waters.

Lava also features in a large collaborative print work entitled Mater, where Osborne’s images of lava flows are placed side by side with Meaney’s bird, gorilla and human skulls.

The exhibitions at Uillinn: West Cork Arts Centre, Limerick City Gallery of Art and Highlanes Gallery have been made possible through the support of the Arts Council of Ireland’s Touring and Dissemination of Work Award and the generosity of all venues.

October 8, 2022 -&nbsp3:00 pm November 12, 2022 -&nbsp5:00 pm
Prev Exhibition An Act of Hospitality Can Only Be Poetic
Next Exhibition Siobhan McDonald: A Change in the Signal/Crystalline