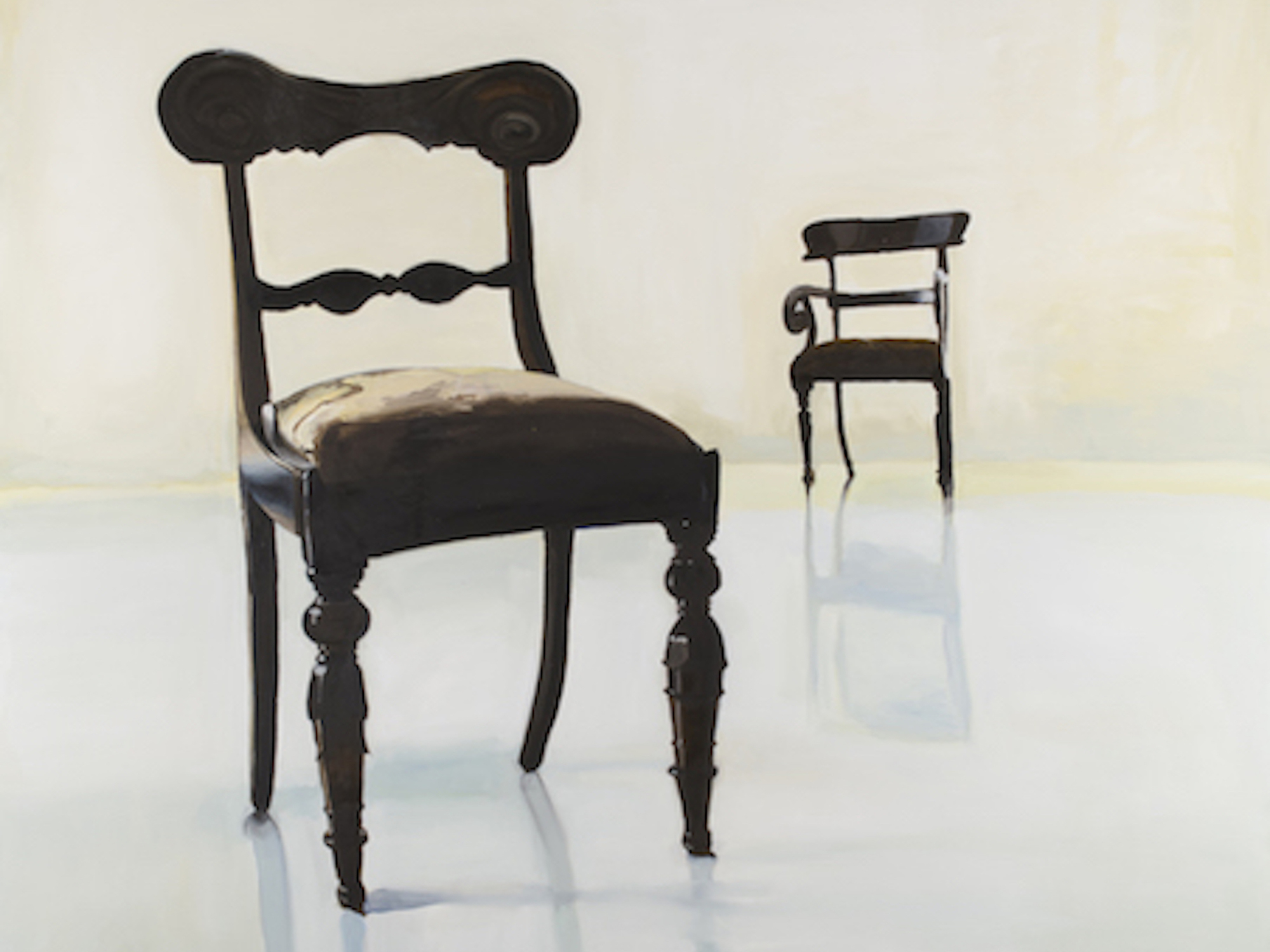 Jack Kornfield in A Path with Heart describes ‘taking the one seat in the center of the room, opening the doors and windows and seeing who comes to visit.’ When we take the one seat in Buddhist meditation it is said we become our own monastery. We create the compassionate space that allows for the arising of all things such as sorrow, loneliness, shame, desire, regret, frustration and happiness.
The focus of investigation in this new body of work for mid-career artist, Mary A. Kelly,  is the chair; armchair, couch, as a physical object in space. It is a resting place, container, location and position. It’s position on its own or with another or other chairs is a conversation about relationships with people, objects and self.
Be seated, take a seat, take one’s seat is something we take for granted today but was not always the case. The first chairs in ancient Egypt were supported on representations of the legs of beasts or the figures of captives. They believed that chairs needed to incorporate natural forms to avoid creating chaos in the universe by constructing an artificial object. The earliest known Greek chair dates to 6th century BC. It was not until the 12th century that chairs became widespread in China. For most civilizations until the Renaissance the use of the chair was mostly confined to high office. The 20th century saw the increased use of technology with metal folding, plastic and ergonomic chairs. Their common use has evolved relatively recently.
Mary A. Kelly’s interest in this project started many years ago while taking part in a group psychotherapy process. ‘The simplicity of the room and the depth of life experienced in that space led me to explore many similar rooms with my camera. Eventually my focus became the chair as a construct aside from life and a witness to life. The exploration extended to chairs beyond the psychotherapeutic rooms into other living rooms. The intimate space of the psychotherapeutic experience opens out into a broader public space and life itself. Eventually the paint brush took the place of the camera.’ Mary A. Kelly, January 2019.
A chair or seat is a piece of furniture that holds and supports the human body. In these paintings the body is absent but implied. The intention is to create a pause or resting point for the artist and the viewer.  The gallery, not unlike the secular church, stands as a temple between life itself and art. The sound recording of the dawn chorus is the natural orchestration of birdsong with the advent of dawn after dark and Spring after Winter. It is a homage to the Natural World with respect and wonder.

Chair: Mary A. Kelly is a solo exhibition curated and initiated by Aoife Ruane, Director, Highlanes Gallery, Drogheda (9 February – 13 April) and presented in partnership with Uillinn/ West Cork Arts Centre, where it will tour to in the autumn (26 October – 12 December), after exhibition at Custom House Studios (6 – 30 June), the exhibition was granted an Arts Council Touring & Dissemination Award. The exhibition is generously sponsored by Anglo Printers, Drogheda, and one of Ireland’s leading and innovative print solutions providers.

Mary A. Kelly will be in conversation with novelist, journalist and freelance curator, David Galloway, on Saturday 9th February at 3.30pm. Free, all welcome.

Highlanes Gallery is presenting Two Chairs, a complementary programme of evening recitals of traditional music within the exhibition. In a series of four unique performances, some of the best and most influential artists are set to perform, including Zoe Conway & John McIntyre, Wednesday 27 February at 7.30pm, Liam O’Maonlai, Wednesday 6 March at 7.30pm, Dave Sheridan & Padraig McGovern, Wednesday 27 March, and Tara Breen & Padraig Rynne, Wednesday 10 April at 7.30pm.

Also, In partnership with Drogheda Classical Music Series, and bringing the DICMS 2018/19 season to a conclusion, Highlanes Gallery is delighted to welcome Belfast-born pianist, Barry Douglas as he returns to Drogheda, for a solo piano recital on Tuesday 5th March at 7.30pm. For this once-off, intimate performance of Mussorgsky’s Pictures at an Exhibition, presented within Mary A. Kelly’s exhibition Chair and the the fitting surrounds of the gallery. Tickets www.Droichead.com
×
Share