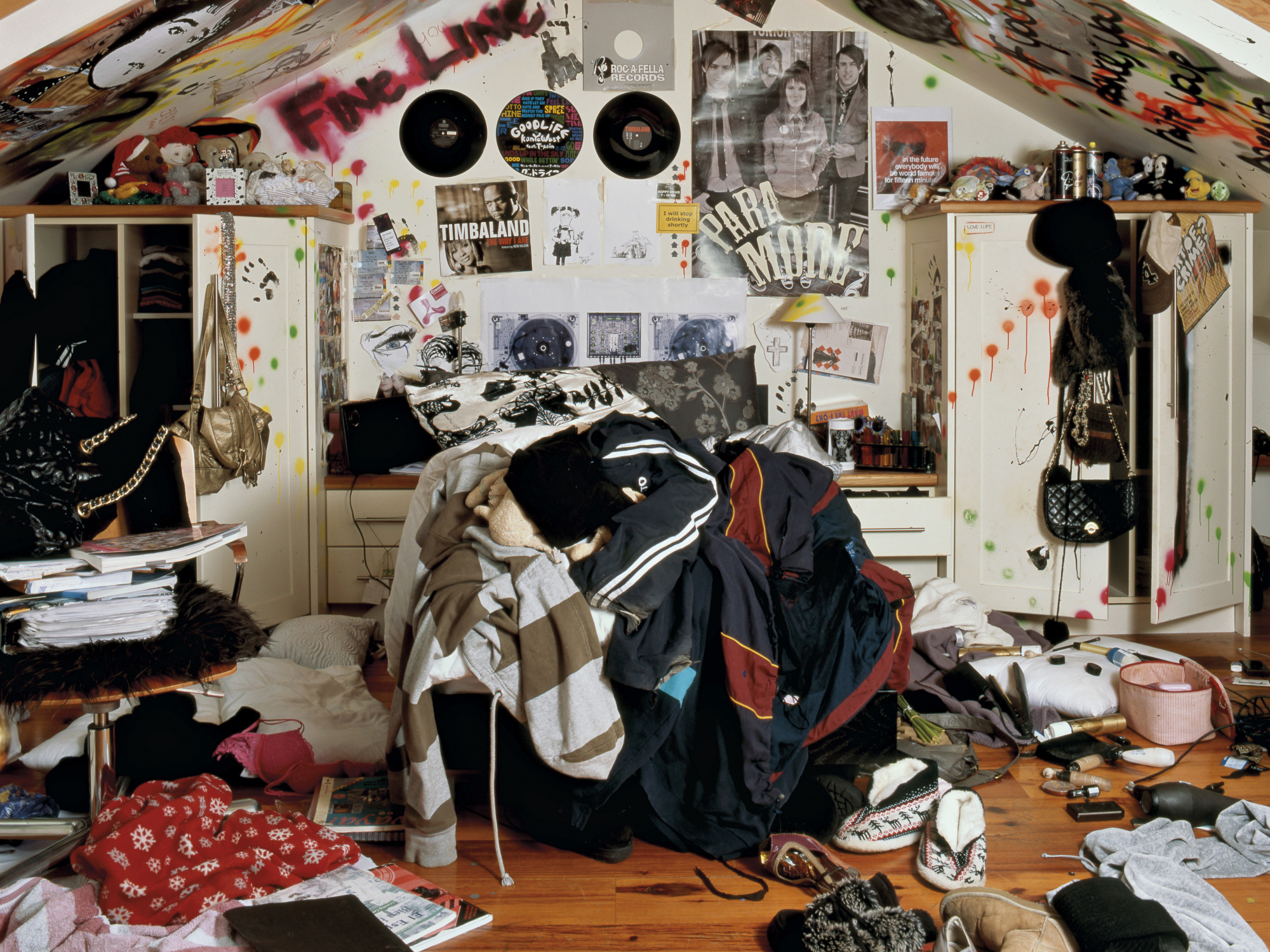 Theresa Nanigian’s practice involves creating portraits of contemporary Western life, be it a profile of a single individual, a catastrophic event or an entire country. These representations often borrow the analytical systems, tools and aesthetics of other disciplines such as sociology, economics, psychology and logic. just a bit extraordinary is no exception and is comprised of three ‘chapters’ in which the artist has chosen an equal number of idiosyncratic groups, loosely aligned to a particular stage in psychosocial development, to serve as her muse in exploring the expression of identity across the lifespan.
The first chapter not sorry is an intimate portrait of the Irish teenager. At a time when almost everything is on virtual display, unrestricted disclosure is the norm and social networking profiles are updated daily, not sorry literally goes behind closed doors into the private territory of the bedroom and seeks to expose the individual beneath the public persona.
Taking its title from one of the responses to a confidential survey, the work combines the personal expression evident on the walls, floors and other surfaces of the bedroom with participants’ frank, and sometimes, brutally honest written expression of their personal identity. Comprised of life size wallpaper, photographs and text, not sorry was exhibited as a solo show in the Draiocht Arts Centre (2012) and Highlanes Gallery (2014).
The second chapter, master of my universe, considers the middle developmental stage of adulthood. While Nanigian chose this stage’s typical preoccupation with earning a living as the point of departure, her choice of cohorts – the vendors on the boardwalk of Venice Beach, California – was anything but commonplace.
Consisting of a diverse range of nationalities, ages, socioeconomic status and most of all, personal narratives of what brought them to this ‘sidewalk circus’, this eccentric group displays an equally quirky spectrum of merchandise, entertainment and personal philosophy. master of my universe was exhibited at Limerick City Gallery of Art (2017/2018), and drew on work from Nanigian’s California residency including text, photography, and a merchandise ‘museum’.
The third chapter trying to behave employs a particular pastime as the lens through which to explore older age – the bi-monthly tea dances at the Royal Opera House in Covent Garden. Having attended this event on numerous occasions, observing, filming, and surveying numerous patrons, the artist uncovered several dichotomies about this disparate group of individuals who share an ardent passion: Composure and vulnerability; vivaciousness and feebleness; spirit and neediness; beauty and decline. trying to behave consists of photographs, text and a short video projection, and was installed at The Lab (2017).
Highlanes Gallery, Drogheda; the third venue, the tour initiator and producer, led by curator/director Aoife Ruane, will exhibit the three ‘chapters’, and an exhibition monograph. The exhibition will open on Saturday, 22nd September, 2018 at 3.00pm.
Just a bit extraordinary takes its title from one of the photographed sitter’s responses to the common link across each exhibition – the Twenty Statements self-concept survey by sociologist Manfred Kuhn, which asks individuals to respond to the prompt ‘I am’.

Just a bit extraordinary is funded by the Arts Council of Ireland and was awarded a Touring and Dissemination Grant to enable the tour, the accompanying publication, and access through Arts & Disability Ireland to audiences who are blind and with visual impairments using the Discovery Pens, exploring the works through audio descriptions, artist’s and curatorial statements.

The exhibition and tour is sponsored by Drogheda Credit Union, Drogheda – Bettystown – Trim