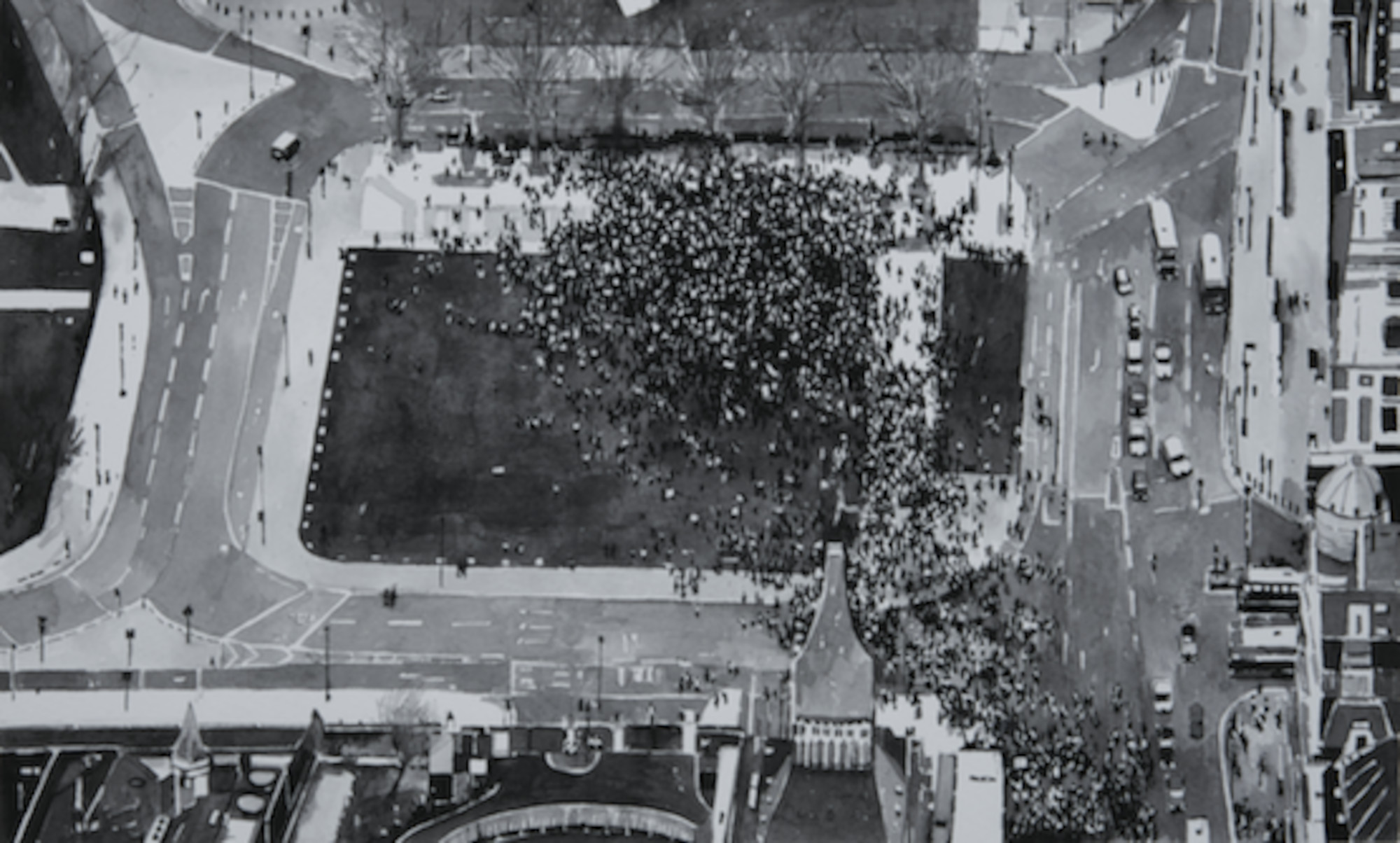 What happens when democratic processes express and produce social division?  How are the outcomes of democratic processes resisted and critiqued? How does protest make use of visual-cultural means to ‘make injury visible’?  (Rebecca Solnit)
As a spectacle of resistance, public protest has a long history and is a powerful form of expression in a time of instant, ‘citizen enabled’ global media.
Drawing on over a decade of image-making and research on themes of protest and urban space, Irish artist Joy Gerrard archives and painstakingly remakes media-borne crowd images. Her subjects include climate change, Brexit, BLM protests, and women’s equalities. These crowds are re-imaged in large monochrome paintings and small complex drawings made with Japanese ink.
The elemental simplicity of Gerrard’s ink drawings and paintings contradicts the material complexity of making. The viewer considers the precarious freedom of protest and the relation between populism and representative democracy. In her work, the figure of the crowd represents an expression of collective agency. Gerrard’s crowds are often viewed from above in built environments, indicating media surveillance.
The fluidity and drama of the moment are expressed through precise, expressive mark-making. Moments of protest are thus figured against enduring historical structures and the re-scaling of news images into dramatic, painterly forms disrupts our understanding of their ephemerality.
In Precarious Freedom, Gerrard is showing a series of drawings made during 2020 and 2021 and new, large-scale installation works.
For Dark Europe, Gerrard has stripped the color from all 27 national flags in the European Union. The flags are hand-painted on silk and placed on opposite walls of the gallery. This work was conceived as a response to Brexit; however, Gerrard now considers it as an elegy or mourning work, post-Covid.
Its unified, monochrome sculptural form might prompt us to reflect on how the pandemic has reinforced nationhood, borders, and blocs.
In response to very recent protests focusing on women’s rights and freedoms, Gerrard has made Barrier. In these painted screen works, the images are bisected and folded, from other perspectives, the viewer can see the whole image. The free-standing paintings become barricades within the gallery space.
Barrier 1 reproduces a helicopter view of the Sisters Uncut protest that moved through central London from Scotland Yard to Westminster after the Clapham Common vigil for Sarah Everard, a young woman abducted and murdered by police officer. The protest is small; in contrast to many of Gerrard’s other crowds, it does not fill the streets but is dominated by the surrounding architecture and contained by lines of police. At around a thousand people, viewed from a commanding, surveillant height, it appears vulnerable and a more identifiably embodied presence.
The event itself controversially blurred the distinction between protest and vigil for the loss of Everard’s life, generating troubling media coverage of young women protesting against violence being grappled to the floor and physically restrained during the arrest. Importantly for the subjects of Gerrard’s work, the Sarah Everard protest also marked a moment overshadowed by a new and disputed UK Police Bill, the intent of which is to radically increase state powers to control public demonstrations.
At the present juncture then, Gerrard’s years of patient documentation and reflection on protesting crowds allow a further set of questions about the fate of the politicized crowd amid new state responses in the UK to resistance, populism, and protest.

Joy Gerrard lives and works in Belfast. She graduated with a BA from NCAD, Dublin, and an MA and MPhil from the Royal College of Art, London. Gerrard is known for work that investigates different systems of relations between crowds, architecture, and the built environment. Using Japanese ink on paper and canvas Gerrard makes detailed ink works that re-create recent political protests from around the world.

Recent solo exhibitions include ‘Put it to the People’ at the Golden Thread Gallery, Belfast, ‘supermarket‘ in Stockholm with Ormston House (2019), ‘shot crowd ’at the Royal Hibernian Academy, Dublin (2017) and Protest Crowd, Peer UK, London (2015). Selected group exhibitions include: Protest and Remembrance, Alan Cristea Gallery, London, 2019 and In a Dream You Saw A Way To Survive and You Were Full of Joy; Hayward Gallery Touring show (2016) She has installed multiple public installations since 2004 including major works in the London School of Economics, Chelsea and Westminster Hospital, for Tideway (London) and Facebook (London and Dublin).

Gerrard completed an artist residency at the Centre Culturel Irlandais in Paris in 2020.

The exhibition will tour to Galway International Arts Festival 2021 and the Butler Gallery, Kilkenny, Spring 2022

This exhibition has been granted an Arts Council Touring & Dissemination Award.

Pre-booking is encouraged, but walk-ups are facilitated. Visitor’s details are taken for contact tracing.