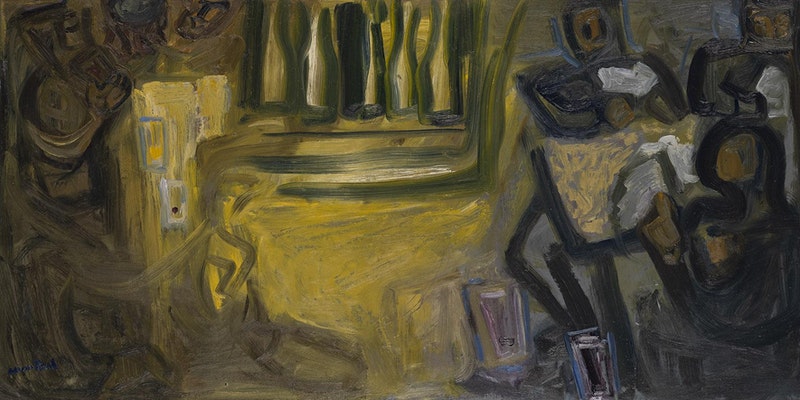 Explore more about artist Nano Reid and her life with community historian Brendan Matthews, as he takes you through some of the streets and lanes of the old Market town of Drogheda, reflecting on the sights and sounds that inspired much of the artist’s greatest work.

The first tour from 11:00am to 11:50am, considers Nano’s early years, outlining her family background along Magdalene St. and the Peter St. /Fair St. junction, William Street where one of her former studios were situated, and even the premises of her first-ever solo show in Drogheda during the 1930’s.

The second tour, 1:30pm to 2:30pm, focuses more on Nano later in her career and life. From Bachelors Lane to James’s Street, Brendan will relate to all fascinating insights about Nano and her later life in Boyneside. Moving up via the Dublin Road, you will be brought through Poor House Lane and to the magnificent rural setting of Sunnyside & Errigal, Nano’s final home before her death in 1981.

PLEASE NOTE: Bookings are separated into Morning (11am) & Afternoon (1:30pm) times and can be made through Eventbrite below;

All tours begin at Highlanes Gallery on the following dates & times;

Make the most of your day by booking for both, take a visit to our exhibition beforehand, and a spot of lunch with our Five Good Things Café between tours!

REMEMBER: Wrap up, prepare for bad weather, wear a face covering and enjoy the ever evolving new information and insights that Brendan is discovering.

Meeting at the gallery, Brendan Matthews first stop will be closeby at Magdalene St. and to the Public House premises where Nano was born.

Here, he will outline Nano Reid`s family background along Magdalene St. and the Peter St. /Fair St. junction, elaborating on the wider context of Nano’s paternal and maternal (Downey’s), homesteads.

From there the tour will move to William Street to one of her former studios and where her father, Thomas Reid, held a number of properties; one of which today is of architectural heritage interest.

Following that the tour will take in the premises where Nano’s first-ever solo show in Drogheda took place during the 1930`s, at the request of the Mayor, after its success in Dublin.

The Walk ‘n’ Talk will move down through Palace Street and Lawrence St back to the gallery where you can then visit the exhibiton and reflect on the tour.

In the Footstephs of Nano Reid: (Afternoon Tour)

Explore more about artist Nano Reid and her life as you traverse some of the streets and lanes and the most beautiful rural settings of the old Market town of Drogheda, reflecting on the sights and sounds that inspired much of the artist’s greatest work.

Beginning at Highlanes Gallery the tour will proceed down Kezer`s Lane, through Bachelors Lane and Mayoralty Street and across De Lacy Bridge to the South Quay and James’s Street area of the town and where Brendan will relate some fascinating insights pertaining to Nano and her life Boyneside.

The tour will move up the Dublin Road, through Poor House Lane and to the magnificent rural setting of Sunnyside & the wonderfully-named Errigal; the final home of Nano Reid, prior to her death in 1981. Here, Brendan will discuss one of Reid’s works that she painted in 1973 which has a special signficance to the location.

From Errigal, the tour will then move across Sunnyside to St. Mary’s Cottages and proceed down the 101 steps into the magical Dale Valley, before ending at the bottom of Mary Street at the Celtic Cross War Memorial.