Kern perform in the Courtyard 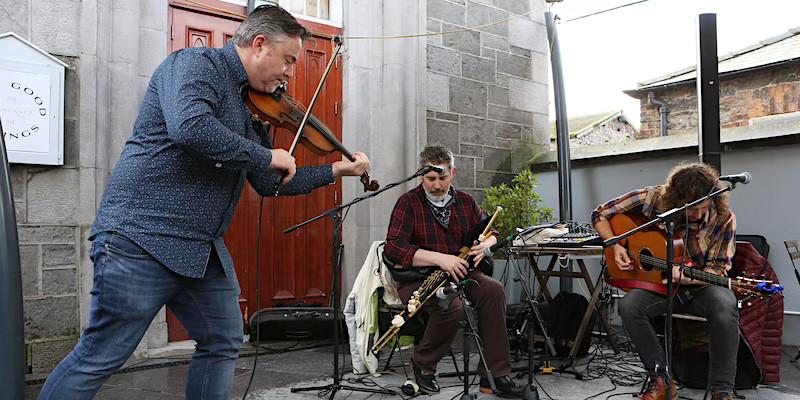 Join us for Culture Night this Friday 23rd September at 6.20pm and experience outdoors a great informality and electric energy from folk band Kern, as they perform under the canopy in the courtyard.

When Kieran Hanrahan told the world on RTE that Irish Folk raconteurs Kern were, ‘Future legends in the making’, he wasn’t wrong. Do you Kern…? You should!

Kern is a modern Folk Music group moulded from the historic northeast of Ireland that was once known as Oriel, featuring the traditional music influences of the west of the Ireland, specifically, County Clare.

The release of their latest single – a folk reimagining of the Thin Lizzy classic ‘Don’t Believe a Word’ (slowed down and stretched out with sonorous vocals, guitar, fiddle, pipes and whistles) – will hasten their steps in the direction of the ‘…future legends’ accolade bestowed upon them.

The new Kern sound is enjoying a new Kern attitude and approach to all things related to their craft. High art endeavour with a dedication to sincere and genuine creative output gilded with a happy and humorous outlook has inspired the first series of their podcast ‘The Folk Waffle’, produced in association with An Táin Theatre, Dundalk. An unpredictable and funny mix of conversation and music with specially ‘grilled’ guests on every episode. Join Kern as they waffle and their way through the folk world and beyond.

Kern has accomplished much. They have performed live at Folk Alliance International in Montreal, Milwaukee Irish Fest as Temple Bar Tradfest Showcase Winners, Fleadh TV, Vantastival and Other Voices to name but a few. The band has been featured on TV and radio around the world and a regular on RTE 1 and Lyric FM in Ireland. They recorded 2 critically acclaimed albums: False Deceiver & The Left and the Leaving whilst touring the USA, Italy, Germany, Canada and their native Ireland. Kern is just about ready to execute their ‘no-holds barred’ manoeuvre and take this unsuspecting world by storm!

Walk by, tune in, and enjoy a few minutes or the full 60 minute performance.

This event is free, and unseated.