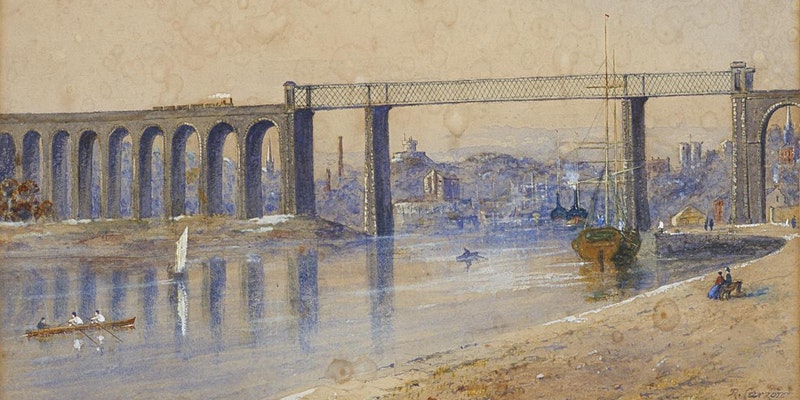 Join Community Historian Brendan Matthews for the second of our Heritage Week Talks.

Explore some of the artwork in the Collection that considers the industrial life of Drogheda Port as you walk and talk with Brendan Matthews this Heritage Week. After a short introduction in the courtyard of the Methodist Church, walk to the Port where he will discuss the work of five artists, Laurence Fagan, Roper Curzon, Nano Reid, Thomas Markey and Gary Reilly.

A Victorian wonder of its age, the Boyne Railway Viaduct was magnificently captured by Laurence Fagan in 1858, the first art-work he undertook when he returned to Drogheda in that same year from the Claremont Institution where he had finished teaching. The second view of the Viaduct was carried out 20 years later by Henry Roper Curzon, but this time, Curzon is viewing the `Great Bridge` from the opposite side to Fagan`s view 20 years earlier.

These two images of the Bridge from both up river and down are majestic in that they really capture the incredible Victorian engineering of Industrial Drogheda just after the mid 19th century. Nano Reid and Thomas Markey had also captured the workings of the Industrial Port in the mid. 20th century. The legacy of this work and the history of the port has further inspired contemporary artist Gary Reilly, whose video work Duanaire has recently been acquired to the Collection.

You can book your place on our Eventbrite page here: From Highlanes to the High Tide – Eventbrite

The Deal: This talk is free, but numbers limited.

The Suggestion: Grab a takeaway coffee (hot or iced) and a lemon bar from our colleague cafe, Five Good Things for €5, just before the start time of 11am.

And don’t forget: An umbrella – raincoat