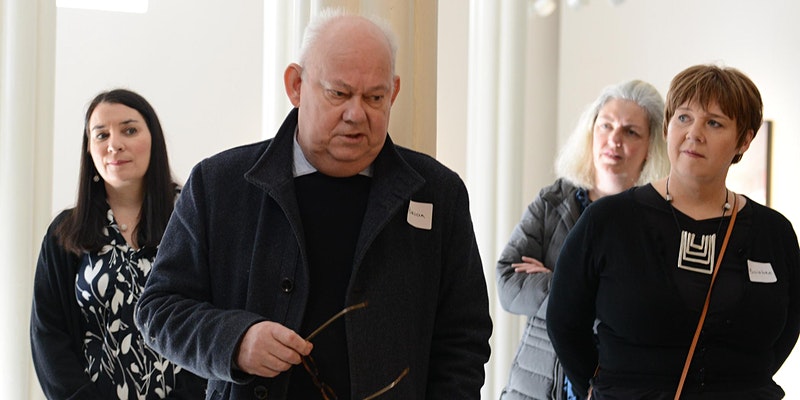 Join WE ARE HERE exhibiting artist Brian Maguire Saturday March 26th, 12:30pm, whose work Children and Self (Remembering), 1986 is on loan from Collection of the Arts Council/An Chomhairle Ealaíon, for this gallery talk on his practice exploring painting and content, fiction and reality, and considering works which were based on events in Mexico, Syria, and Arizona, and which are currently on show at the Missoula Art Museum.

Booking available through Eventbrite below;
Artist’s Gallery Talk – Brian Maguire – WE ARE HERE

A painter, Brian Maguire (71) has approached his painting as an act of solidarity with people whose voice is censured by the powerful. Working like a journalist, this preoccupation has drawn him to the margins of the art world – alternative spaces, prisons, favelas, women’s shelters and psychiatric institutions, cities engulfed by war – making the tradition gallery show a rarity. He works slowly using mostly found photography. His recent show Remains, Crawford Art Gallery is based on police images of deceased migrants whose bodies are discovered in the US in the Senora desert between Herocia Nogales and Tucson. He has worked continually on stories from the US/Mexican Border since he began working on the Femicide in Ciudad Juarez in 2007. He sees the issue of class as the determining factor in most injustice.

Recent solo shows include the Museum de Arte de Ciudad Juarez, Mexico, the Rubin Centre for the Visual Arts, El Paso, Texas, (2019) the headquarters of the UN in New York, (2020), the Rhona Hoffman Gallery, Chicago (2021) and the Christophe Gaillard Gallery, Paris (2021). Opening in April (2022) is a solo show of large paintings from this decade in the Missoula Art Museum, Montana, USA. He is currently working on a show looking at the Missing and Murdered Indigenous People (M&MIP) with Indigenous American families from reservations in Montana including the Blackfeet, Crow, Kootenai and Salish Tribes and the Missoula Art Museum. Brian Maguire is represented by Kerlin Gallery.